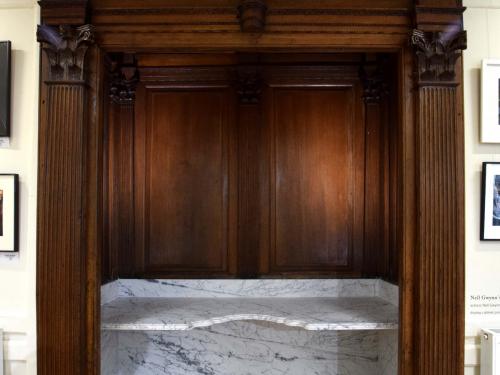 The large wooden alcove on the right-hand side of our entrance hall is often called Nell Gwynn’s bath. But it has little to do with Nell, an actress in the 1600s, or her bathing habits.

The intricately carved structure was probably installed by Quaker linen merchant William Mead, who lived here from 1677 to 1680. However, we’re not sure exactly when it was made, where it first stood or when parts like the stars on the inside ceiling were added.

In William’s day many wealthy people had ‘buffets’ like this in their homes. William placed it in what was then a grand dining room, where he could show off his finest gold and silverware. Today this is the only place in England where you can see a buffet that hasn’t been moved since the late 1600s.

The link with Nell Gwynn is pure fantasy. Nell may have stayed at Lauderdale House in 1670, with King Charles II, but the buffet wasn’t here at the time.

The ’bath’ underwent a major restoration in 2016/17 inspired by a watercolour of the Bath dating back to 1858 by John Wykeham which can be seen here.