Insieme: A Summer Night at the Opera

Overview
Our Programme
Our Performers

Find our more about the Highgate Festival
https://highgatefestival.org/

As a Lockdown Lauderdale alternative to their planned ‘evening of instrumental and vocal music from and inspired by Opera’, Insieme are delighted to have been given access to the gorgeous Upper Gallery at Lauderdale House to create a ‘socially distanced’ condensed version as part of the Highgate Festival.

Join us online for a programme of vocal and instrumental music from Mozart’s operas Don Giovanni and Cosi fan tutte, a touch of Massenet and Gershwin and scenes from Carmen including the Sarasate Carmen Fantasy.

There is no need to book as you can simply click the link below BUT if you would like to make a donation for Insieme and Lauderdale House to share please click the pink 'Book Now' button on the left and follow through to make a donation. This way we can track donations for this concert and make sure Insieme are rewarded properly - as with all things Covid-19, our website isn't really set up for the current situation, and this is the best way we can give you the chance to donate.

This concert is dedicated to the memory of all those that have died in the Coronavirus Pandemic and to their families. We are Insieme - Together  with you in our hearts and in our music making.

Don Giovanni sings of love, to Donna Elvira’s maid, beneath her window.

Don Giovanni attempts to seduce the maid Zerlina, on her wedding day.

Fantasie for Viola and Piano

“You ladies who know what love is, is it this from which I suffer?”

Don Jose brings out the flower thrown at him by Carmen after the ‘Habanera’, which he has kept, and sings of his love for her.

Intermezzo for solo violin and orchestra from Act II

Evening Prayer from Hansel and Gretel

Lost in the forest, the children pray before going to sleep.

Summertime from Porgy and Bess

“May the winds be gentle, may the waves be calm,

And many every one of the elements respond warmly to your desire. “

Love Unspoken – Duet and Ensemble from The Merry Widow

This concert is dedicated to the memory of all those that have died in the Coronavirus Pandemic and to their families. We are Insieme - Together with you in our hearts and in our music making.

Performing in the Long Gallery:

Anna Fitzgerald, Soprano, is a graduate of Italian & Spanish from the University of Bristol. She is currently studying singing under Neil Baker, and her next performance will be with Opera Integra singing Olympia in Offenbach's The Tales of Hoffmann. She was recently a student of Morley Opera School where she has performed in masterclasses and opera scenes such as Thomas’ Mignon and Poulenc’s Les Dialogues des Carmelites. She has performed roles in several of the Bristol University Operatic Society’s productions, including Galatea in Handel’s Acis and Galatea, First Lady in Mozart’s The Magic Flute, Miss Silverpeal in Mozart’s The Impresario and a fairy in Britten’s A Midsummer Night’s Dream. Other solo appearances include a Witch in Purcell’s Dido and Aeneas at the Bristol Proms, Lola in Mascagni’s Cavalleria Rusticana with Bristol Opera and Celia in Gilbert and Sullivan’s Iolanthe with London Garden Opera. During university, Anna was a regular performer on the Oratorio scene, and sang the soprano solos in every major concert with the University Chamber Choir including works such as Handel’s Messiah and Mozart’s Mass in C Minor. Having spent a year abroad for her degree, Anna has performed with the Verdi Opera Company in Buenos Aires and an operatic chorus in Italy, singing Verdi’s Macbeth and Oberto.

Joe Corbett, Baritone, is from Cork. He sang Uberto in Insieme’s production of La Serva Padrona at Wilton’s Music Hall.  Joe studied at RIAM, CSM, and at Guildhall. For Opera Theatre Company, roles include The Rape of Lucretia (Tarquinius), Carmen (Escamillo), The Cunning Little Vixen (Harăsta), The Magic Flute (Papageno) and Pagliacci (Silvio); for Opera Ireland Carmen (Dancaïro) and Don Giovanni (Masetto); for Wexford Festival Opera Zaïde (Osmin); at the National Opera House, Wexford The Invader (Rex). For the Royal Opera (Linbury) he sang in Gentle Giant (Narrator); for English Touring Opera The Marriage of Figaro (Count), The Magic Flute (Papageno) and La Bohème (Schaunard). Acting roles include Deflowerfucked (Tony) and Oedipus Loves You (Tiresias) for Pan Pan Theatre. Musicals include Kiss Me Kate (Petruchio), Guys and Dolls (Sky) and Side by Side by Sondheim. He has recorded Joan Trimble’s The County Mayo, and roles in the operettas Eileen and Dearest Enemy.

Johanna Byrne, Mezzosoprano, studied singing at the Royal Northern College of Music and the National Opera Studio as a Peter Moore’s Scholar. She performed widely as a soloist in Opera, Oratorio and Recital including at St Martin in the Fields, The Queen Elizabeth Hall, Sadler’s Wells, The Rossini Festival at Pesaro in Italy, The Gaiety Theatre Dublin, The Aldeburgh Festival, The Buxton Festival, The Linbury Studio Theatre at the Royal Opera House Covent Garden and The Walter Reade Theatre at the Lincoln Centre in New York. She performed with The Salzburg Festival, Opera North, Scottish Opera, Wexford Festival Opera and Opera Holland Park. Johanna has coached and taught singing for many years and has been a vocal advisor to conductors and choirs, including the London Symphony Chorus and the Huddersfield Choral Society. She has devised and directed a number of community/education performances in Ireland, Shetland and the U.K. as well as Insieme’s Award-winning production of Pergolesi’s La Serva Padrona at Wilton’s Music Hall.

Mona Kodama, Violin, graduated from the Kunitachi Music High School in Tokyo, and the Guildhall School of Music in London.  She has studied with Akiko Suwa in Japan, Yfrah Neaman and Mark Knight in London and Joey Corpus in New York. Mona is frequently in demand in Japan where she is a popular recital soloist.  In Britain, she specialises more in chamber music.  As well as her involvement with Insieme, she is the violinist of the Marmara Piano trio, and co-leads the Keld Ensemble in London.  Mona has given concerto performances with several British orchestras, and has performed as soloist and chamber musician in many other European countries. Mona is professor of violin and viola at the Junior Guildhall School of Music in London and teaches for Hertfordshire Music Service.

Guillem Calvo, Violin, started his musical studies with Albert Sàrrias and Evelio Tieles in Barcelona and then moved to London to study at the RCM with Yossi Zivoni and Shmuel Ashkenasi in Germany. Since 2005 he has been member of many chamber groups like Quartet Albéniz, Cre.Art Ensemble, Altissimo Ensemble and others with whom he has recorded many comercial CDs and DVDs. He has toured the UK, Spain, France, Italy and Portugal as a chamber musician as well as freelancing with European orchestras like the London Symphony, European Camerata or Orquestra de l’Òpera del Liceu in Barcelona, while teaching the Suzuki Method based in London.

Juan Drown, Viola, studied at Wells Cathedral School, Cambridge University, the Moscow Conservatoire and the Guildhall School of Music in London. He has performed concertos and recitals across the UK as well as in France, Romania, and his native Isle of Man. In 2000 he was awarded the Vaughan Williams Bursary at the Tertis International Viola Competition. Juan is a bit obsessed about chamber music. He has been principal viola for the City Chamber Ensemble, Altissimo Ensemble, and the Keld Ensemble. He jumps at any opportunity either to play or to coach chamber music! As Lead Teacher for Strings in West Hertfordshire Juan has responsibility for developing string playing among the young people of the area.

Australian-born musician Clare Clements, Piano, studied Music, and History and English Literature, at Melbourne University and piano accompaniment at The Victorian College for the Arts and the Royal Northern College of Music. After completing her studies, she joined the staff of the RNCM as Lecturer and Accompanist whilst maintaining a busy chamber music career, accompanying instrumentalists and singers in recitals and broadcasts throughout the UK, Ireland, Austria, France, Holland and her native Australia. She made her conducting debut in 2005 with Mendelssohn’s Elijah and has since conducted the Verdi Requiem, Haydn’s Creation, Carmina Burana and Judas Maccabeus. More recently, Clare conducted her first opera, as the Musical Director of Insieme, for their Award-winning production of Pergolesi’s La Serva Padrona at Wilton’s Music Hall. Clare continues to enjoy a varied performing schedule, as well as coaching and teaching. She is an Examiner for Trinity College London.

And joining us ‘From Home’

Brian Parsons, Tenor, is a first study piano and singing Graduate of the Royal College of Music and RCM Opera School. He won the prestigious Major van Someren-Godfrey English Song Prize and was a Finalist in the Richard Tauber, National Federation of Music Societies Awards and Royal Overseas League Competitions. Brian has worked for the ROH, ENO, Glyndebourne and Wexford Opera, and has sung in concert and recital.in Europe, the USA, South America, the Middle East and China. From 1998 to 2017 he was professeur de chant at the Conservatoire National Supérieur de Musique et Danse in Lyon and is currently on the staff of the Guildhall School of Music and Drama, London. Brian runs his own singing courses in Dorset: WorkshopWeekend@Winfrith.

Hester Dart, Contralto, is a London based contralto and graduate from the University of Leeds, currently studying with Neil Baker. They spent two years at the Morley College Opera School where repertoire included; Didymus (Theodora - Handel), Madame Haltiere (Cendrillon - Massenet), Older Woman (The Flight - Dove), Orfeo (Orfeo ed Euridice - Gluck), Cherubino (Le Nozze di Figaro - Mozart). In summer 2019, Hester performed at Grimeborn Festival in the debut of Verity Lane’s The Crane, which enjoyed sold out shows and is planned to do a second run in 2020 (venue tbc). Equally as interested in chamber music, Hester is working on an eclectic repertoire under the tutelage of Kate Ryder, including songs by Ethel Smyth, Poulenc, Barber and Tchaikovsky. Hester is an Insieme Young Artist, joining their regular performances at Lauderdale House since Christmas 2018. 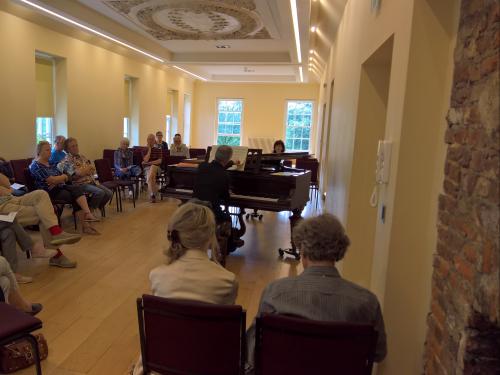 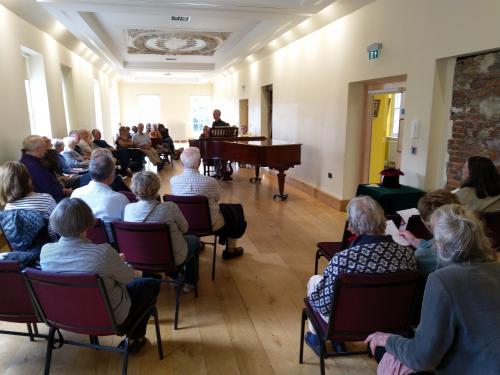 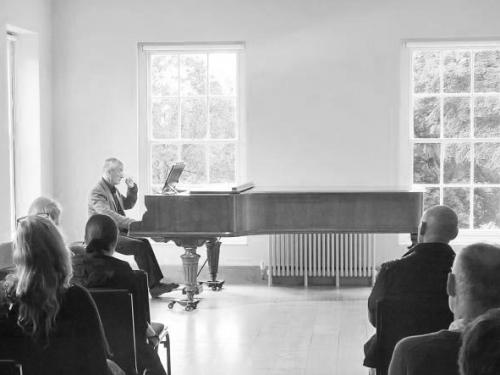 Available online
A series of free classical monthly concerts which usually take place in the House, but during Lockdown are going 'live' online and then available as a recording.
See more