See more from: History and Heritage

This is a free online event. If you would like to attend, you must book your space by midday on Saturday 27th February.

This is a free event. Suggested donation £5.

If you have missed the deadline, but would still like to join, please email us at enquiries@lauderdale.org.uk or call us on 020 8348 8716.

Highgate has been famed for its schools for centuries. Whilst initially they were modest affairs, with perhaps 30 pupils or fewer, Highgate’s schools were instrumental in bringing education to the local poor as well as the prosperous. Atop the hill, they were considered healthy, conveniently situated for prosperous potential parents living in cities of London and Westminster.

Highgate was also the closest place to London where children whose parents were not members of the Church of England could legally receive an appropriate education, whether Methodist, Unitarian or Jewish. In the decades after 1830 such schools slowly began disappeared, as Victorian worthies, religious bodies and later local and national government created larger schools for all ages in line with their own values: schools which are still with us.

In this session, we’re giving you the opportunity to learn about the unique past of several schools in particular.

Nick Peacey, one of Lauderdale House’s board members, will chair the talk, accompanied by: 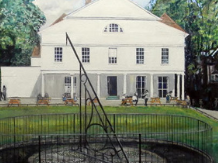 Available online
This exhibition features a range of wonderful artists and their images of Lauderdale House, Waterlow Park and our local area. From oils to inks to watercolour, you might be inspired to see Lauderdale in a whole new light, too.
See more