Lauderdale House may once have played host to a major celebrity. The actress Elinor Gwynn, known as Nell, is thought to have stayed here for a short time in 1670. Nell began life in poverty, selling oysters and oranges to make a living. By the age of 20 she was enjoying the well-to-do home of the Earl of Lauderdale – all because of her connection with King Charles II.

A pioneering performer
The King’s companion
A demanding mother
A true story? 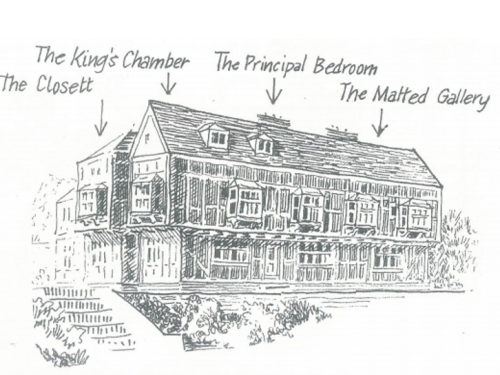 Nell Gwynn was one of the first ever English actresses. Before she joined the King’s Players in the 1660s, all parts in plays – even female ones – were performed by men. And middle-class men at that.

Nell acted at the Drury Lane theatre in Covent Garden while still a teenager. She used the stage name ‘Madame Ellen’.

At the time, any woman on stage created a spectacle, but Nell was especially known for her comic talent. Quite a feat given she could barely read.

Nell Gwynn was said to be both pretty and witty. Soon after she met King Charles II Nell became one of his many female companions.

It’s likely the Earl of Lauderdale, whose wife owned the House, let the couple and their baby son stay here so they could spend time together.

Nell and Charles had another son the following year, but neither child inherited Charles’s crown because the couple were not married. The King’s actual wife had no children of her own.

What lengths would you go to persuade the most powerful man in the land to do something? Nell Gwynn risked her own son’s safety.

When Nell wanted the King to give their baby an aristocratic title, she is said to have held the boy out of a window in Lauderdale House.

“Make him a duke or I drop him,” demanded Nell. The King replied, “God save the Earl of Burford!” Or so the story goes. Other versions of the tale place it in a completely different building.

We can’t say for sure that Nell Gwynn stayed here, but the Earl of Lauderdale, whose wife owned the House, certainly knew King Charles II. An official document from 1685 even describes one of the rooms as the ‘King’s Chamber’.

Lauderdale was one of the King’s closest advisors, who supported Charles in both his political and personal affairs. The Earl could easily have helped the King spend time with Nell. And Highgate was a perfect spot to escape the prying eyes of the royal court.

There’s less evidence to support the story that Nell held her baby out of a window here. But both her sons did receive titles from Charles.

Top image: Nell Gwynn, Museum of Fine Arts, St Petersburg
Left image: Drawing of what the House may have looked like in 1685