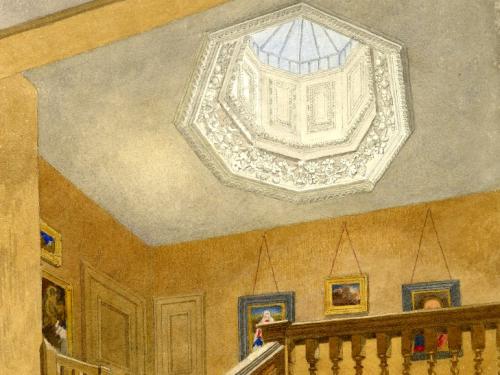 The eight-sided dome above our first-floor landing isn’t quite what it seems.

The ‘cupola’ was first installed by Edward Pauncefort, a Member of Parliament who lived in Lauderdale House in the 1700s. Edward was a wealthy man and such a fashionably decorated feature would have appealed to his fine tastes.

Edward’s cupola was destroyed by fire in 1963. The faithful plaster replica in its place may be a modern ‘fake’, but this reconstruction helped us transform an empty shell of a building into what you see today.

When the Lauderdale House Society took over the disused building in 1977, the cupola became a focus for fundraising, since its reconstruction offered a more practical goal than aiming to restore the entire House. Reinstating the lost dome brought back a key architectural feature, but it was also the crucial first step in the journey to open Lauderdale House as a space for our local community.