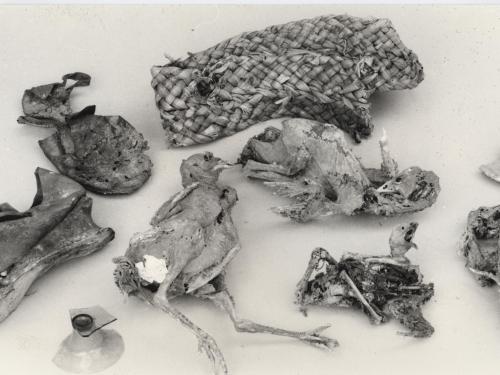 A chicken, an egg, a candlestick and a high-heeled shoe...

These are just some of the strange objects discovered by workmen repairing our first floor in 1961. The men found a hidden compartment near a fireplace in the long gallery upstairs. Inside were four chickens, parts of a yellow candlestick and drinking glass, two odd shoes, a length of cord and an egg.

This collection of good luck charms hadn’t been seen since Lauderdale House was built over four hundred years ago. The original builders bricked the objects into the House to protect it from evil spirits. This was common practice at the time, though chickens weren’t often used.

Two of the chickens had been strangled. The other two may have been buried alive. One still has eggshell attached to it, perhaps because it laid the egg before it died.

These finds are the most complete ‘builder’s sacrifice’ to be discovered in London. For safekeeping, they are now housed in the Museum of London.