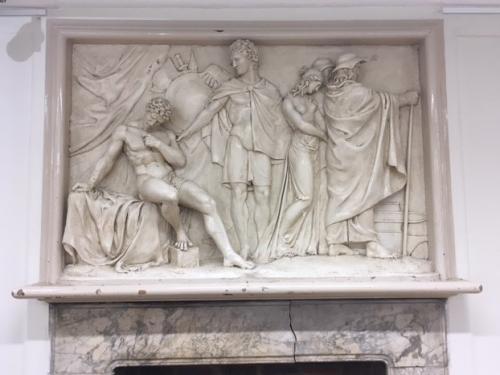 The plaster sculpture above the fireplace in our entrance hall illustrates the first key event in an Ancient Greek poem. It was probably installed by James Yates, an expert in Ancient Greek and Roman art who lived in Lauderdale House from 1850 to 1871.

The scene shows Briseis, a Princess enslaved during the Trojan War, as she is taken away from Achilles (sitting to the left), the Greek warrior who captured her. Much to Achilles’s annoyance, Briseis is being handed over to the leader of the Greek army, Agamemnon. This episode sparked a quarrel between the two men that lies at the heart of the Iliad, a poem written by Homer over 2800 years ago.

The figure standing in the centre of the sculpture, Patroclus, once lost his head. It was replaced by Sasha Young, a sculptor and founding member of the Lauderdale House Society.