Doors will open at 1pm. The concert will begin at 1:15pm.

We are very excited to be bringing back our Free Lunchtime Concerts! Take a break on a Tuesday lunchtime and enjoy 45 minutes of gorgeous classical music performed live by our resident pianist Stephen Hose upstairs in the beautiful Long Gallery overlooking Waterlow Park.

Stephen Hose trained at the Royal Academy of Music where he held a Vaughan Williams scholarship, and has worked extensively as a Musical Director, conductor and pianist in London and regional theatre.  He has played at most of the London concert halls and has performed in France and Germany.  He is currently Pianist in Residence at Lauderdale House, Highgate.

Projects abroad have ranged from the English Theater of Frankfurt to The Lost Colony at the 2,000 seat outdoor theatre on Roanoke Island, USA.  TV work has included being the pianist on Channel 4 ‘s Titanic, The Mission,  accompanist for The Choir, and 5 years as Musical Associate/Director for TV productions of Christmas Glory.  He was Chorus Master for Jessye Norman’s Ellington’s Sacred Songs at the Barbican Theatre and Epidavros, Greece.

His work as Music Director for OperaUK has included Barber of Seville, Cosi fan Tutte, La Traviata, the Merry Widow, Olé and El Amore Brujo.  For Merry Opera work includes La Traviata, The Magic Flute, Kiss Me, Figaro!, The Barber of Seville and La Belle Hélène (aka Troy Boy).  He has also conducted over 50 performances of their unique staged Messiah.

• Requiring masks at all times unless exempt.
• Keeping a record of contact details for lead bookers.
• Conducting extra regular cleaning.
• Welcoming audience members with hand sanitiser.
• Designating toilets for your event.
• Keeping windows open for good ventilation.
• Encouraging audience members and staff to wear masks, unless exempt or when eating/drinking.
• Recommending taking a lateral flow test for everyone attending.

We are also asking attendees to book in advance to limit numbers. Tickets are free, but do let us know if you can no longer attend so that we can release the spaces to others. 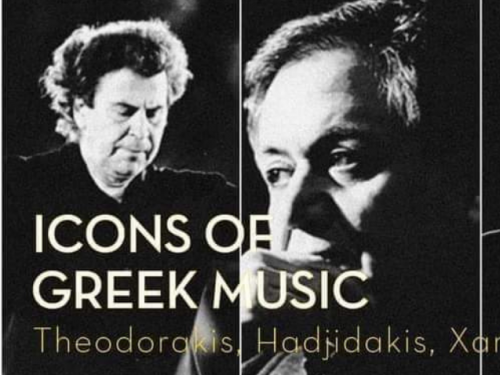 Sunday 20 March
Musicians from the "Icons of Greek music" project come together once again to perform a concert of music by three of Greece's most loved and iconic composers.
See more