Lauderdale House was once a country retreat for a well-known Quaker. In 1677 wealthy linen merchant William Mead bought the House as a second home. Seven years earlier, he had appeared in court, a defendant in a sensational human rights trial. 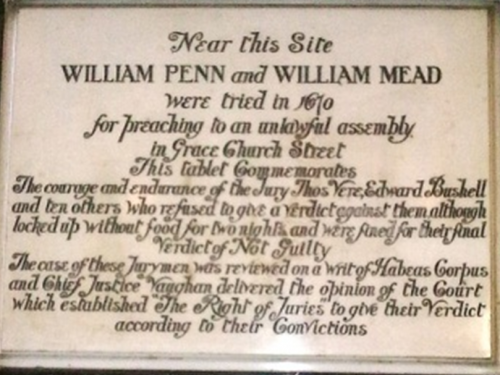 A grand home for a religious outsider

Lauderdale House was once a country retreat for a well-known Quaker. In 1677 wealthy linen merchant William Mead bought the House as a second home. Seven years earlier, he appeared in court, a defendant in a sensational human rights trial.

At the time, the King viewed anyone who didn’t follow the Anglican church as a threat. If six or more people gathered together to worship another religion they risked ending up in jail.

When William attended a crowded Quaker meeting in the City of London he was charged with disturbing the peace. Although the jury found William innocent, the judge disagreed. What happened next led to a new principle of English law.

William Mead and fellow Quaker William Penn were tried at London’s Old Bailey in 1670. The jury found the two men guilty of speaking in Gracechurch Street, but not of the wider charges against them.

The court claimed the meeting had been a wild gathering and that William Penn had preached there. After the verdict, the chief judge kept the jurors overnight and threatened to starve them. He repeatedly sent them away to reconsider their view. They repeatedly refused to say what the judge wanted.

Eventually, the jurors were fined and imprisoned for ignoring the judge. They were later cleared and a new principle entered English law: that a jury should be allowed to come to their own decision without interference. As for the men on trial, William Penn went on to found the American city of Pennsylvania, while Mead used his wealth to support other London Quakers.

William Mead owned Lauderdale House for three years. He probably spent more time at his other home in Fenchurch Street, close to business contacts in the City, yet made plenty of alterations here. Some were, perhaps, a little too grand for a Quaker, someone expected to live a simple life.

William rebuilt the impressive main stairs and installed a large, carved wooden alcove in his dining room, now the entrance hall. Half-covered in white marble, this ‘buffet’ had a wide central shelf where William could show off his collection of gold and silver dishes.

Thanks to William’s improvements, the House sold for a profit. William’s homes may not have been plain, but the founder of the Quakers, George Fox, didn’t seem to mind. George often stayed with William and visited Lauderdale House several times.