Lauderdale House was once a new rest home for the sick, full of beds, patients and nurses 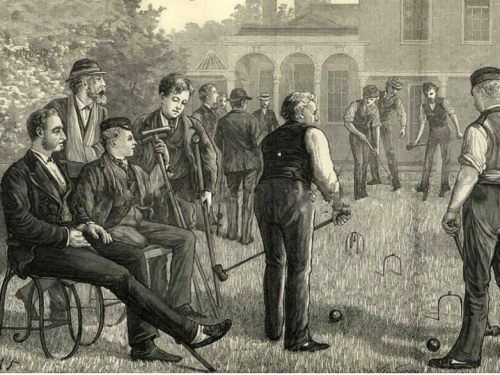 A new rest home for the sick

Lauderdale House was once full of beds, patients and nurses. In 1872 Queen Victoria’s son, the Prince of Wales, opened the building as a place where patients could rest after spending time in hospital.

This was the first convalescent home set up by St Bartholomew’s Hospital, which is still based in Smithfield in the City of London. The home offered higher levels of medical care than similar hospitals of the time.

The building was converted into wards by its then owner, Sir Sydney Waterlow. Sir Sydney loaned the House to St Bartholomew’s and asked for nothing – not even a penny’s rent – in return.

On opening day, the Prince of Wales toured the wards of Lauderdale House with his wife. He declared the home open and thanked Sir Sydney Waterlow for his generous donation.

Over 150 people came to party in the grounds, enjoying plenty of refreshments and musical entertainment. Guests included the Lord Mayor of London, a world-famous American surgeon and Highgate local Angela Burdett-Coutts, one of the wealthiest women in England.

The Prince came here in his official capacity as president of St Bartholomew’s Hospital, but he and his wife may have shared a more personal reason for visiting. The Prince himself had been dangerously ill with typhoid just months before. During his fever, which lasted for several weeks, the Princess was often at his bedside. When the worst was over, the Prince, like the patients at Lauderdale House, took time off to make a full recovery.

A different sort of hospital

Before St Bartholomew’s Hospital opened its first convalescent home at Lauderdale House patients were usually sent home very quickly. If they went back to work without taking enough time off many became ill again.

Lauderdale House was an ideal place for patients to rest and recover. Its 34 beds stood in cheerful, airy wards, with coloured prints on the wall. Patients could enjoy the beautiful, open gardens. And the Highgate air was drier and healthier than the suffocating smog of the City. As patients felt better, they might read one of the 300 books in the library or play a gentle game of croquet on the lawn.

It wasn’t just the location and facilities that made a difference. Most other convalescent homes only provided food and rest. Lauderdale House’s trained nursing staff, and a visiting doctor, offered specialist medical care when needed.

A garden for the gardenless

Sir Sydney Waterlow ran a successful printing firm but had a life-long interest in medicine. He oversaw the building of Whittington Hospital lower down Highgate Hill and worked with nursing pioneer Florence Nightingale to recruit suitable staff for St Bartholomew’s.

When Sir Sydney bought Lauderdale House in 1865, it was rented to a tenant. Following their death, Sydney let the House to St Bartholomew’s rent-free for seven years. The Lancet medical journal described his donation as ‘handsome and humane’, but it was only ever a temporary measure.

In 1885, St Bartholomew’s opened a new convalescent home with twice as many beds in Swanley, Kent. After failing to find a buyer for the now empty Lauderdale House, Sir Sydney gave the building and its grounds to London County Council. He wanted the Council to create a garden for the gardenless, a public park for enriching the lives of the working classes.