Lauderdale House has had a precarious past, escaping demolition and destruction a number of times. During World War II, the house had a lucky escape when a German bomb fell just a stone’s throw away. 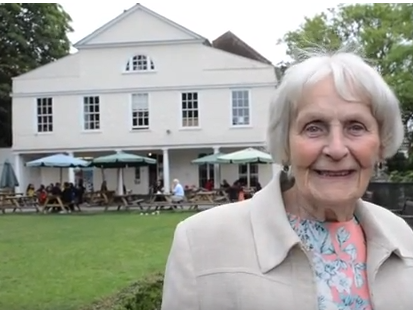 A childhood shelter from the Blitz

Lauderdale House was once home to gardeners and keepers who worked in Waterlow Park. During World War II they, their families, and the house itself, had a lucky escape when a German bomb fell just a stone’s throw away.

Joy Hunt - now Joy Whileman - came to live here in 1934, when she was just two years old. Six years later she and her family sheltered in the building while London was under attack.

When Joy was just eight years old London was a target for regular nightly bomb strikes. For nine months during 1940 and 1941, people all over the city protected themselves from ‘the Blitz’ in specially designed air-raid shelters.

Several iron shelters were half-buried in Waterlow park, but Joy and her family spent most nights sleeping in Lauderdale House, on the ground floor. This may have been because the outside shelters felt cold, dark and cramped. Many other local people slept in Highgate tube, which had 60 bunk beds set up on its platforms deep underground.

One night, the covers on the outside shelters were blown right off and Joy heard an overpowering wind. She had no idea what it was. We now know a high explosive bomb landed on Hornsey Lane, about two minutes’ walk away. Joy, her family and Lauderdale House had a close escape.

One morning during the war Joy walked up to the top of Waterlow Park with her father. From there they looked down to see a devastating view of London.

The bombs that fell overnight had set the city alight. The whole of London looked completely red. “I thought, I’m sure London’s burning,” remembers Joy. At the time, she feared there would be nothing left of the city.

On the worst nights of the Blitz thousands of fires burned across London. Many would have continued into the following day, giving the gardeners and keepers who lived at Lauderdale House a fiery view of the capital.

Joy and her family lived in a flat at the top of Lauderdale House for about 13 years. At that time, the present café was a tea room and the rest of the House was split into five apartments for park staff.

Joy’s father, a gardener, was given the largest flat because he had the largest family. His wife gave birth to two children here, in a room now used as an office.

Joy moved out in 1947. When she returned almost 70 years later it was the first time she’d ever seen some parts of the House. Alterations since Joy’s time meant many areas were unrecognisable; others were more familiar. “It’s changed,” said Joy, by then in her 80s, “but it still feels like home”.